Impromptu billboards were created on Michigan Avenue late Wednesday night. The sidewalks were completely cleared of snow, because a great majority of the snow was piled on top of the large sidewalk planters. These huge mountains of snow provided people with the opportunity to express themselves.

Inspired by these freestyle expressions, I wanted to join in on the fun, so I scouted around all the planters, but most of the good spots visible from the sidewalk already had writing. So mine was written facing the street saying "Matt & Sarah 7•18•15".

In order to get a photo of the writing, I kept backing up, backing up, backing up, eventually I was in the slushy street bumping up against a snow pile.  Moments like this are when snowpants and huge snowboots come in so handy! Determined to get the photo of the writing and the surrounding context, I climbed the snowhill like a mountain climber. Standing atop the urban mountain, I snapped a few shots and then dropped my iPhone into the snow. Oops! 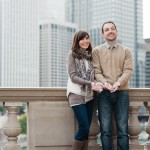 Fun fact about this photo:
In the background is the Wrigley Building's plaza--one of the places where Sarah and I stood for our engagement photo session--which eventually became the basis for the drawing on our Save the Date card.